We are taught from our very first guitar lessons to alternate our fingers. All beginning guitar methods emphasize the importance of alternating "im" or "ma" or "ia.

To Alternate or Not to Alternate—THAT Is the Question

We are taught from our very first guitar lessons to alternate our fingers. All beginning guitar methods emphasize the importance of alternating "im" or "ma" or "ia." Segovia advises us to practice his major and minor scale patterns with "im," "mi," "ma," "am," "ai," "ia," and "imam." Learning to alternate the fingers in different patterns is a very important part of good right-hand technique. However, as one plays more advanced repertoire, slavish adherence to the rule "always alternate the fingers" becomes a questionable practice in some passages. To alternate, or not to alternate, this is the question we will examine in this tech tip on right-hand fingering.

The main reason we alternate our fingers when playing is for relaxation. Repeated use of one finger, especially at a fast tempo, tenses the finger and in turn, the entire hand. Keeping the right hand relaxed results in increased accuracy, speed, and rhythmic clarity.

It almost goes without saying that one must alternate the fingers when playing fast scales. It is very difficult to achieve anything resembling speed without alternating. And if you play a fast scale passage and accidentally or intentionally use the same finger for two or more notes, chances are you will slow down slightly at that point resulting in a rhythmically uneven scale. Imagine running as fast as you can and suddenly using one foot twice.

But there are exceptions to maintaining strict alternation. If there is a slur in a scale passage, unless the passage is very, very fast, usually a finger may be repeated from the slur to the next note without losing control or evenness (example #1):

Although I don't recommend it, some players (especially some flamenco players) like to repeat fingers at string changes on descending scales (example #2):

As far as which fingers to use in playing fast scales, most players prefer "im." Some prefer "ia," reasoning that these two fingers are of more equal length than "i" and "m," giving a more even balance to the hand as one alternates. Narciso Yepes recommended using "ami" on many scales explaining that this pattern yields greater speed with less effort than a two-finger pattern. He is maintained it produced a smoother scale with less inherent metrical accent than a two-finger scale.

Whichever pattern you use, it is clear that with a few possible exceptions as noted above, one must use strict alternation when playing rapid scale passages. It is a good idea to have someone observe your right hand as you play fast scale passages to be certain you are alternating. It is very easy to accidentally repeat fingers without realizing it. I have seen students unknowingly repeat fingers on a two-octave C major scale played at a moderately slow tempo. Unknowingly repeating fingers when playing fast or difficult scales can cause total confusion when one is under pressure in a public performance.

As noted above, strict alternation of the fingers helps to ensure rhythmic evenness in fast scale passages. Rhythmic clarity on dotted rhythms is also important. Let's look at example #3:

In example #3 above, the dotted figure in measures one and five should be played very crisply, perhaps even double-dotted. Alternating "m" and "i" is the best way to ensure a crisp rhythm with little effort. Try playing it with all "m" and you will feel your hand tense and hear an ill-defined rhythmic figure in which the dotted eighth becomes too short and the sixteenth too long. But most players would alternate anyway in this kind of situation. Or should I say, intend to alternate. I have lost count of how many times I have caught a student using "m" on each melody note in measure five even though they thought they were alternating "m" and "i." So always double check to see that you are using your intended fingering on dotted passages.

For example, I had a student working on the Courante of Bach's Lute Suite No. 1, edited by Julian Bream. She was having difficulty with this passage (example #4):

Finger alternation is also a valuable technique in playing staccato passages. Remember that most staccato is correctly produced by the right hand stopping the strings, not by the left-hand fingers lifting off the strings. In general, the right hand is able to produce a cleaner, more varied and controlled staccato than the left hand. Again, using Bianco Fiore as an example, measure three is often played staccato to give the phrase a dance-like flavor (example #5):

Many players would play each interval in measure three with "p" and "m" (or "i") and stop each interval (the staccato) with "p" and "m." Although it could be played that way, a lot of tension would be produced in the right hand and arm because of the fast speed at which the piece is usually played. A far better way is to alternate. 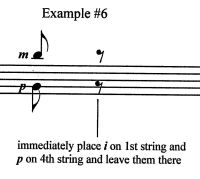 Then cut the sound of those two notes by immediately placing "p" and "i" on the fourth and first strings. Now that "p" and "i" are on those two strings, go ahead and pluck the next interval with "p" and "i"—they are already on the strings. (Example #7): 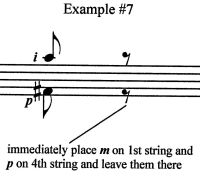 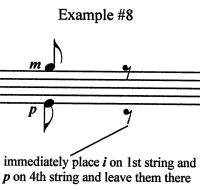 Then cut the sound of that interval with "p" and "i." With "p" and "i" on the fourth and first strings, you can go ahead and play the trill in the next measure with those fingers.

And so on. By alternating the fingers, one can play staccato notes at a fast tempo and still keep the right hand and arm tension-free.

Again, the use of right-hand finger alternation is obviously beneficial in many instances where dexterity, speed, and ease of playing are of prime consideration.

Naturally, they tend to favor that finger for notes that are on the beat. When they alternate their fingers, one hears the alternation: strong tone, weaker tone. Of course, such a player should cultivate their tone so there is not a disparate sound between the fingers. But even if this is done, the alternation of the fingers will still be heard because of the different distance each finger plucks the string from the bridge.

Let me emphasize, there is nothing wrong with there being a slight difference in tone between say "i" and "m" and being able hear a very slight strong-weak pulsation when alternating "im." In fact, even if "i" and "m" produced identical sounds, if we played a scale of quarter notes in 4/4 time, we would and should give a slight emphasis to beats one and three. The sound of a guitarist alternating two fingers can be likened to that of a violinist playing with down and up-bow. The down-bow is slightly stronger and fuller than the up-bow. Used appropriately, down and up-bowing or alternating the fingers lends the music a pulse and helps define the rhythmic meter. But there are many instances where one does not want to hear a pulse or especially, a difference in tonal quality between notes.

One example that comes immediately to mind where alternation is a questionable practice, is in the initial statement of the subject in a fugue where that subject is in slow moving notes (example #9):

In the Fuga, hearing the repeated E's played by alternating fingers and thus resulting in a slightly different tone on each E literally makes me cringe. To me, the alternating tone ruins the purity of the line. Remember, I am talking about tone, not the rhythmic pulse. Giving a rhythmic pulse to the opening subject or even detaching the notes slightly from one another may be entirely appropriate. But in my opinion, the quality of each note, especially the repeated E's, should stay equal, serene, and pure.

Try playing the subject of this fugue with "m" throughout, then again by alternating "im." I think you will agree that the alternating tone if "im" is very distracting and unmusical by comparison with using "m" (or "i") on every note. And there is no problem here technically with repeating a finger over and over. The tempo is slow enough that no tension is caused in the hand or finger. (You could alternate at the 16th notes if rhythmic crispness becomes a problem.) You will also find that you become more sensitive to how you play each note and your sense of touch in the finger will become heightened when you use one finger repeatedly on this passage. This feeling of increased tactile awareness is an important benefit of this technique.

In the following Fugue in D Major, I would likewise use the same finger to pluck each note to maintain the continuity of tone within the subject (example #10):

Indeed, to take this philosophy to its extreme, the ideal way to play a four-voice fugue would be to use the thumb for the bass voice throughout the piece, "i" for the tenor voice, "m" for the alto, and "a" for the soprano. In this way, each voice would have its own distinct sound and individuality thus maintaining the contrapuntal clarity of the piece throughout.

The use of a repeated finger to maintain the evenness of tone may also be applied to more modern music (example #11):

Here, it can be argued that on this very slow, exposed melodic passage, a more beautiful, musical sound is achieved by using the same finger to play every note or at least those that fall on one particular string. Note that where the line separates into two voices, it would be permissible and even desirable to use "m" repeatedly on the first string and "i" repeatedly on the second string.

But remember to be careful not to sacrifice rhythmic clarity or reasonable ease of playing for tonal evenness. For example, using "m" to play all the melody notes of the second movement of the Vivaldi Concerto in D Major is admirable in terms of tonal beauty, but the rhythmic precision of the dotted rhythms could be compromised and the musical effect ruined (example #12):

In Fernando Sor's famous Etude in B Minor (number five in the Segovia edition) Segovia fingers the right hand in an arpeggio fashion where for the most part, "i" plays the third string, "m" the second string, and "a" the first string (example #13):