In the previous two months (Interval and Chord Balance Part 1 and 2) we have considered several methods to control the balance of notes within intervals and chords. In this article we will discuss some special techniques and examples involving the thumb.

INTERVAL AND CHORD BALANCE, PART 3 OF 4

In the previous two months (Interval and Chord Balance Part 1 and 2) we have considered several methods to control the balance of notes within intervals and chords. In this article we will discuss some special techniques and examples involving the thumb.

In Etude No. 7 by Heitor Villa-Lobos we find the following passage:

The melodic line, which Villa-Lobos has highlighted for us by placing accents next to each melodic note, occurs in an inner voice played by the thumb. While the B# and second C# in measure 24 and the E in measure 25 pose no difficulty since they sound alone, the others are problematic, particularly the first C# in measures 24 and 26. The C# on the fifth string in the F# minor chord (first beat of measure 24) is the first note of the melodic phrase and must sound distinctly and clearly as a melodic note, not just part of the F# minor chord. For this reason, simply strumming the entire chord with the thumb will not suffice. The most effective way to play this chord would be to:

The entire chord would be arpeggiated: 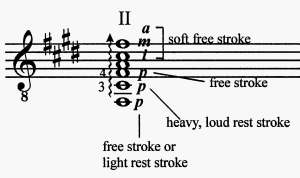 In order to master this technique of using the thumb rest stroke to bring out a note in the middle of a chord, I would suggest practicing in three stages.

First, practice a four-note chord using the thumb rest stroke on the fifth string while using i, m, and a free stroke to play the treble strings:

Gradually play the notes closer together until you produce the sound of an evenly arpeggiated chord with the fifth string sounding forte and the others piano.

In the third stage, add the sixth string (example five). The sixth string can either be played free stroke with the thumb or with a very light rest stroke. In either case, the thumb would barely brush the string, not pluck it. Again, begin by playing very slowly, one note at a time. As an exercise, it would be a good idea to exaggerate the balance playing the fifth string fortissimo and all the others pianissimo:

Again, gradually play the notes closer together until they sound as an arpeggiated chord, the fifth string loud, the others soft. Finally, apply this technique to the F# minor chord in the Villa-Lobos Etude No. 7.

This same technique is useful in many other pieces as well. For instance, Granada by Isaac Albéniz opens with an E major chord in which the melodic note E is found on the third string:

The chord could be arpeggiated in the following manner:

Playing very slowly with the thumb, simply brush over the sixth, fifth, and fourth strings very lightly. Upon reaching the third string, suddenly pull hard into the soundboard of the guitar producing a loud rest stroke, coming to rest securely against the second string. Gradually speed up until the four notes sound as an arpeggiated chord.

Playing very slowly and evenly at first, play the third string with the thumb with a heavy, loud rest stroke followed by the B and E played free stroke with i and m or m and a. Play the three notes faster and faster until they sound as an arpeggiated chord.

Finally, combine the first two stages of the exercise and apply the technique to Granada and other pieces containing similar passages:

A second technique one could use in Granada is an entirely different approach to this passage. You could arpeggiate, i.e. sweep or strum the basses with the thumb, then continue the arpeggio (skipping the third string) with i and m or m and a playing the second and first strings, and then play the third string last with the thumb free stroke. This is relatively easy to do and very effective (example below):

The thumb rest stroke is used not only to bring out a particular note of a chord but to give a chord an exceptionally full, weighty, or powerful sound:

The chord on the first beat of measure five should sound very full and lush. This can be accomplished as follows:

The thumb rest stroke gives the chord a very full and strong foundation in the bass—a “strong bottom-end” and the fingers maintain the correct chord balance by matching the thumb’s power.

Returning briefly to Etude No. 7 by Villa-Lobos, let us cover one more balancing technique. In measure 25 (the 2nd measure in the example below) on the first beat we find an F# on the fifth string (the melodic note) with an open low E beneath it:

Both notes are played rest stroke with the thumb. But, brush the sixth string very lightly with the thumb. Then play the fifth string, also with rest stroke; but pulling (following through) hard into the fourth string. To produce the desired effect, it is essential that the thumb play deeply (into the soundboard) into the fifth string, coming to rest securely against the fourth string. Begin by practicing the notes separately, gradually increasing the speed until they sound together; the sixth string piano and the fifth string forte.

This technique can also be used in Villa-Lobos' Prelude No. 1 as well as numerous other pieces:

Next month we will put these techniques to use by studying an entire piece measure by measure, examining how to properly balance the voices.