An important right-hand technique to learn is that of being able to independently control the volume of each note of an interval, triad or chord. The highest note of an interval or chord (which is the easiest for most players to bring out loudly) is not always the note that should sound the loudest. Here is how to master this technique.

INTERVAL AND CHORD BALANCE PART 1 of 4

An important right-hand technique to learn is that of being able to independently control the volume of each note of an interval, triad or chord. The highest note of an interval or chord (which is the easiest for most players to bring out loudly) is not always the note that should sound the loudest. For example, in the well-known Pavane for a Dead Princess by Maurice Ravel, the melody is played on the second string in the following excerpt:

Example No.1:
Measure 13. Pavane for a Dead Princess by Maurice Ravel (arr. Niedt)

It is essential that the player be able to play "m" quite a bit stronger than the other fingers to bring out the melody line on the second string. Another example is found in the Fuge from J. S. Bach's Praludium, Fuge, and Allegro. In example No. 2 the subject, which is to be brought out very clearly, is between two outer voices: 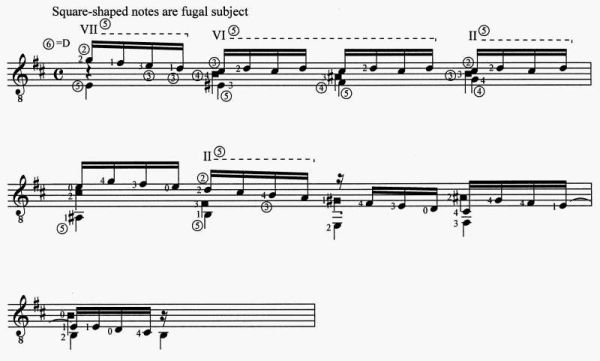 Or, in Luis Milan's Pavana No.2 we have a melodic theme stated in this phrase:
Example No. 3:
Measures 3-5. Pavana No.2 by Luis Milan

The theme is then repeated in inner voices as:

Therefore, to play a piece musically and intelligently, it is important that a player be able to bring out any note of an interval or a chord at will. To take a simple, down-to-earth example, a song such as Down in the Valley could be played in two voices with harmony below or above the melody:

Example No. 5:
Down In The Valley, Melody in upper voice.

Example No. 6:
Down In The Valley, Melody in lower voice.

Example No.5 with the harmony below the melody is the most common situation, where we must bring out the upper voice (melody). Example No.6, though less common, does occur, for instance in Luis Milan's Pavana No.6:

In this type of situation it is fairly difficult to bring out the lower voice louder than the top voice. Of course one could use the thumb to play the lower voice to aid in bringing those notes out louder, but this is often not practical for technical or musical reasons (for example the thumb may not produce the desired tone quality).

A note may need to be brought out or emphasized for many different reasons, not only because it is a melody note or note of a fugal subject, etc. Often a chord serving solely an accompaniment role having no melodic importance can be made to sound like a totally different chord depending on how it is balanced. For example, the following chord occurs in measure No. 6 of Prelude No. 4 by Heitor Villa-Lobos:

Example No. 8:
Chord from measure 6. Prelude No. 4 by Heitor Villa-Lobos

This chord will sound completely different depending on which note or notes are emphasized. In impressionistic music, which often uses colorful variations of sixth, ninth, eleventh, and thirteenth chords, the player may color the music with striking results by balancing the chords in certain ways.

To work on balance control let us begin this month by working with intervals. All the following exercises are to be practiced with free stroke. Hold down the note "d" on the second string third fret with the third finger and the note "f" on the first string first fret with the first finger.

Begin by playing the notes separately, not as an interval. With the right hand play the second string with "p" and the first string with "m". Try to play the "d" very softly so it can barely be heard and play the "f" very loudly almost to the point of making the tone distort. When the thumb plays, just barely brush the string. And then pull the first string very heard with "m". Play the two notes so that they sound closer and closer together until they gradually sound simultaneously as an interval.

Eventually, once the fingers get the feel of the technique, try to capture this same feeling without pre-planting the finger and thumb on the strings. Once again, try to retain that feeling of "m" pulling the string hard while "p' just brushes (or even tries to avoid playing) the second string.

Now, reverse the balance. Try bringing out the second string as loudly as possible to the distortion point and the first string very softly. The same practice principles apply here. Begin by playing the notes separately. Play "p" very loud and then follow quickly with "m" brushing the first string. Gradually play the notes closer together until they sound simultaneously as an interval.

Push With Wrist and Arm to Emphasize Thumb

Then try playing without planting. It might be noted here that the thumb is also easily brought out loudly if you push with the wrist and arm as the thumb plays. This weighty, pushing motion towards the floor has the effect of negating the movement of "m" upwards towards the ceiling. However, this heavy pushing motion with the wrist and arm is usually reserved for use only when an exceptionally heavy bass line or accent is desired. Also be sure to practice both of the above exercises with "p" and "i" and "p" and "a" as well as "p" and "m". We began with "p" and "m" because they are the easiest to control.

Now, With Two Fingers, No Thumb

The following week, using the same practice procedure described above, play the first string with "m" and the second string with "i". You will find balance control much more difficult when using just the fingers as opposed to a finger with the thumb. And again, the technique of pulling the string that is to sound the loudest hard with one finger while lightly planting the other finger on the other string and then releasing the loud string while brushing the soft string is very helpful. Also work with "m" and "a" and with "i" and "a". Then try playing the two versions of Down in the Valley (examples 5 and 6) with all the finger and finger-thumb combinations. And finally, look through the music in your repertoire for passages of intervals and work on producing just the right balance between the notes for each phrase. The balance that you choose will vary according to the musical context, historical period, tempo, texture, etc.

Next month we will work with controlling the balance of three and four-note chords.