This 28-page guide will help you navigate the murky world of harmonic notation and its contradictions and inconsistencies.

SUBSCRIBE TO THE GUITAR TECHNIQUE TIP OF THE MONTH "Hello Mr Niedt,
My name's Gretchen, and I'm so happy I subscribed. I love your awesome technique tips. I'm amazed how much I have improved my playing.
Thank you!"

Check out the game-changing tips in my Vault—I promise they will kick your playing up to the next level.
Subscribe, it's only $36/yr!
You receive full access to:

All that for only $36/yr. LEARN MORE
Everything on the website carries a no-risk, money-back guarantee.

HOW TO READ HARMONIC NOTATION


Welcome to the wacky world of harmonic notation. Harmonic notation for the guitar is a mishmash of contradictions and inconsistencies. Some passages of harmonics in the repertoire are unfathomable as to how they are to be played. But then, you knew that. Since beginning this series of classical guitar technique tips on harmonics, I have received many pleas for help for an explanation of harmonic notation.

The first system notates the open string on which the harmonic will be played with a number indicating which fret to touch. Take note that in this system, the notation does not tell you what pitch is coming out of the guitar. Simple enough, huh?

2. If a diamond shape is used, it may or may not indicate the real note duration (Ex. #2):

3. The number indicating the fret at which the left hand touches the string may be Arabic or Roman: (Ex. #3):

4. The composer/arranger may add one of these terms above the measure:

See Ex. #4 for all these variations:

Therefore, THE SAME HARMONIC may be indicated in any of the following twelve ways (Ex. #6): 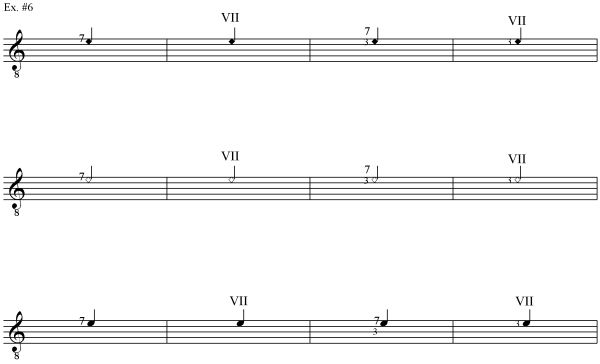 Any of those twelve can take on one of the twelve added descriptive terms mentioned above (harmonic, harm., har., etc.). By my count, so far, that makes 144 possible ways of notating the exact same harmonic.

Another way of notating harmonics in this first system is to use the letter H with an Arabic or Roman numeral to denote the fret. That adds these possible versions (Ex. #7): 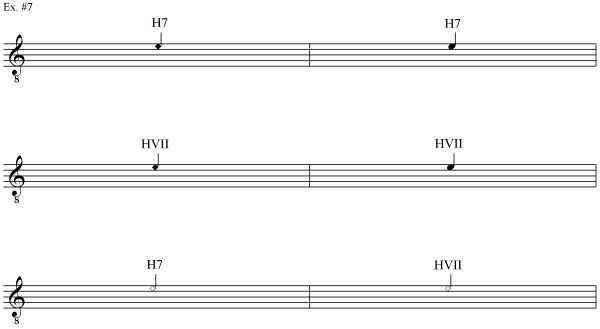 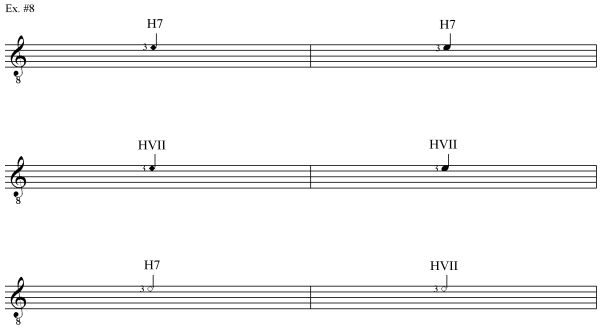 That adds twelve more ways to notate our harmonic. According to my math, we are up to 156!

Plus, a small circle may be added above or beside the notehead in all of the preceding examples (Ex. #9):

That makes a grand total of 312 ways to notate the same harmonic. And again, that’s just with the first of three systems we will look at!

6. As you know, a natural harmonic is normally played with both hands. But it may also be played with the right-hand alone (like an artificial harmonic). Sometimes that will be indicated, sometimes not. When specified, you may see the following notations above the staff or close to the harmonic note:

In his arrangement of Nuages by Django Reinhardt, Roland Dyens uses both types of natural harmonic technique in the same measure. Notice that the system Dyens uses to notate his harmonics is not the one we are discussing. It is system #3 which we will get to soon. But, this is a very good example of how the normal technique and right-hand technique of producing natural harmonics may be mixed together (Ex. #10):

The second system for notating natural harmonics indicates the note where the left-hand finger touches the string to produce the harmonic. Additional numeric information is given to indicate which string the note is on and which left-hand finger to use. Here are three examples (Ex. #11): 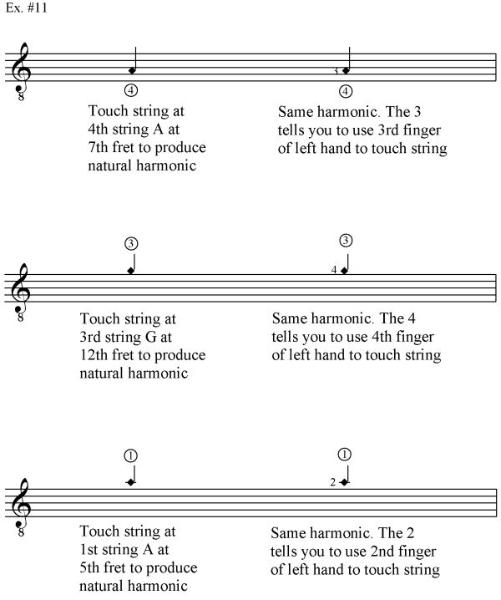 As with the first system of notation, the notehead may be a diamond or not, solid or hollow, and a circle may or may not be placed somewhere by the notehead. Likewise, one of the terms Harmonic (Harm. or Har.), Natural Harmonic (Nat. Harm., Nat. Har., or N.H.), Armonico or Armonica (Arm. or Ar.) may or may not be used (Ex. #12):

The main thing to remember about this system of notation is that the written note may or may not coincide with the pitch produced by the guitar.

At the 12th fret, the pitch of the written note and the pitch that comes out of the guitar are the same (Ex. #13):

At the 7th fret, the pitch that comes out of the guitar is an octave higher than the written note (Ex. #14):

At the 5th fret, the pitch that comes out of the guitar is an octave plus a fifth higher than the written note (Ex. #15):

At the 4th fret, the pitch that comes out of the guitar is two octaves higher (though noticeably flatter) than the written pitch (Ex. #16): 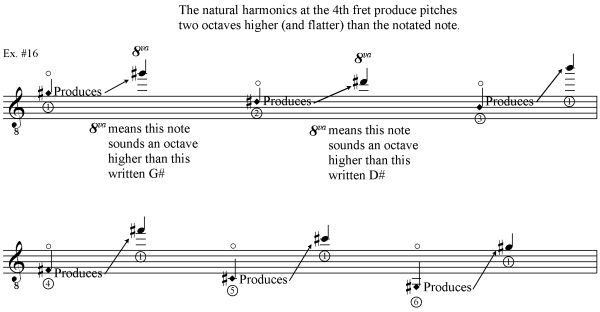 At the 9th fret, the pitches that come out of the guitar are exactly the same as those at the 4th fret. But the notation looks entirely different from that at the 4th fret because again, in this system of notation, we are indicating the note where the left-hand finger touches the string to produce the harmonic. The notes at the 9th fret are different from those at the 4th fret. Therefore, the harmonic notation looks different on paper. But the notes coming out of the guitar are identical (Ex.#17):

At the 9th fret the harmonics sound an octave plus a fifth higher than the notated pitch (Ex. #18): 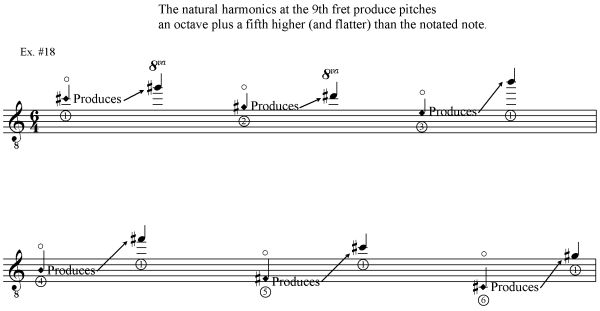 At the 19th fret the harmonics sound the same pitch as the written pitch (Ex. #20):

Some composer/arrangers who use this system of natural harmonic notation differentiate between harmonics that sound the same pitches as the written notes and those that produce different pitches from the written notes. In the well-known natural harmonic section of his Prelude No. 4, Heitor Villa-Lobos used this type of notation. Unfortunately the printed version has many mistakes in it (as do countless other passages of harmonics in Villa-Lobos’ music). This is what he was intending to notate (Ex. #21): 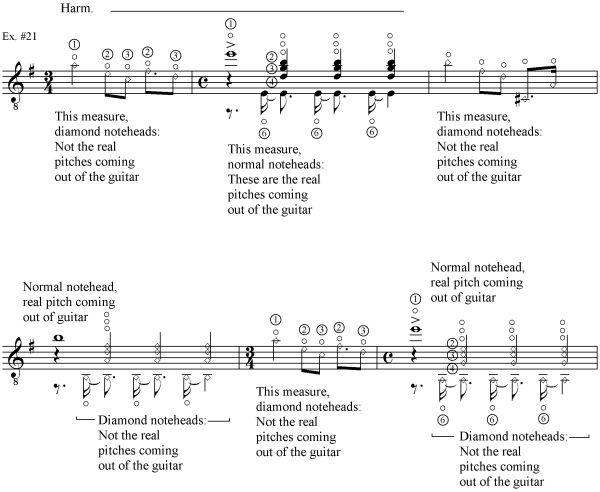 Note Villa-Lobos’ use of the open or hollow diamond noteheads. Other composers/arrangers use this notation as well. I suppose it emphasizes that these are harmonics, but I find it unnecessary. I think it is far preferable and less confusing to use the open or hollow diamond noteheads only for half-notes and whole-notes, as in normal notation. Using the open diamond noteheads for all note values can lead to misinterpretation or obfuscation of rhythms. Incidentally, while we are on the subject of Villa-Lobos, another source of confusion in his music arises from the publisher/printer’s use of the same circle symbol to indicate harmonics and normal open strings.

The third system for notating natural harmonics indicates only the real pitch coming out of the guitar. Sometimes, to help the performer locate the harmonic, additional information is given such as string, fret number (in Arabic or Roman numerals), and left-hand finger to use. Other times it is assumed the performer knows where to play the harmonic or can figure it out.

Proponents champion this system because it shows the real pitches that are intended to be played. In the other two systems, what you see on paper has nothing to do with what you are hearing.

Using this system, the first two measures of the harmonics section in Villa-Lobos’ Prelude No. 4 could be notated as follows. Remember, 8va (ottava) means the pitch sounds an octave higher than written. If the 8va symbol is not used, sometimes the very high pitches can be difficult to read. If it is used, sometimes the contour of the melody is not as clear (Ex. #22): 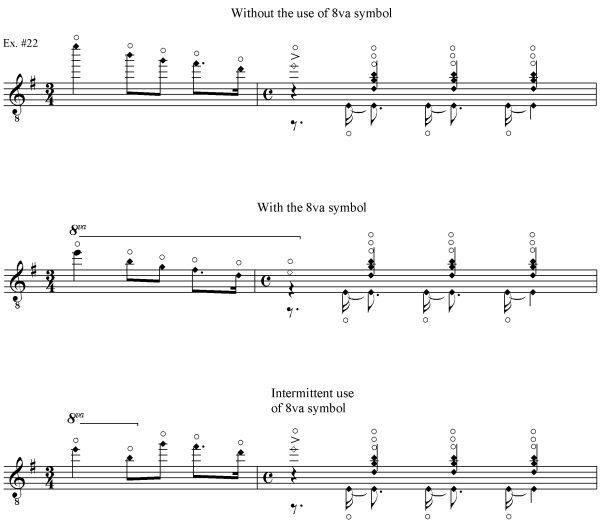 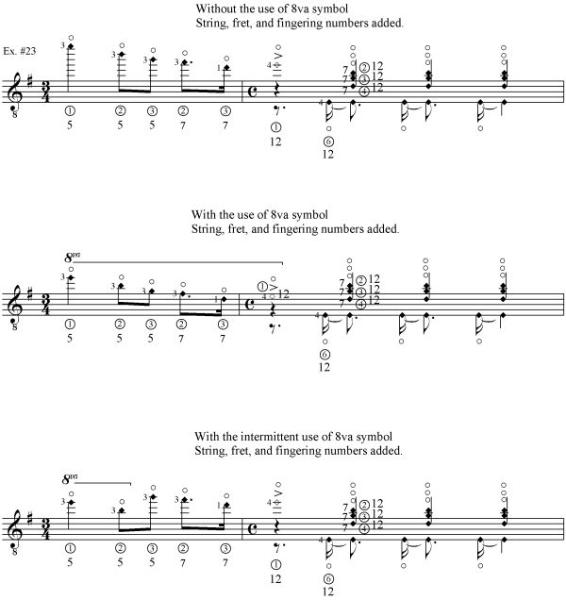 Again, keep in mind that a passage such as this can include all the bells and whistles of notation (diamond noteheads, circles indicating harmonics, and string, fret, and finger numbers) or may be notated in a barebones minimalist fashion such as this (Ex. #24):

For example, the artificial harmonic section of El Testament d’Amelia harmonized by Miguel Llobet could be notated in the following ways (Ex. #25): 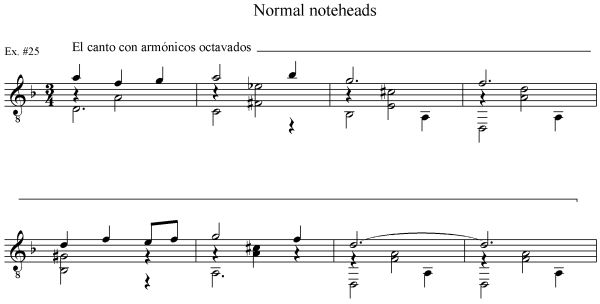 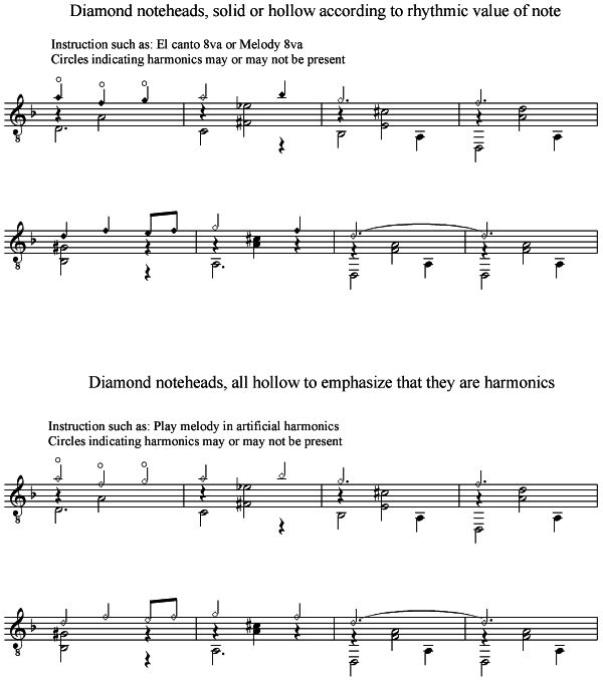 Here is an example of artificial harmonics as notated by Fernando Sor in the fourth variation of his Fantaisie, Op. 6 (Ex.# 28):

Look at this next example of Sor’s notation in the same piece and variation. Here, we have an interval consisting of one note played as a natural harmonic, the other as an artificial harmonic (Ex. #29): 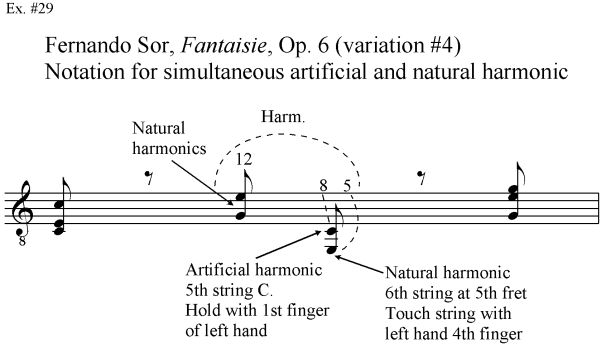 Note that the number 8 with a dashed line pointing to the note C is the only thing Sor uses to indicate the C is an artificial harmonic. He follows System #1 for the natural harmonics, writing the open string with a fret number.

One more example of minimalist notation of artificial harmonics occurs in two measures of the Omaggio by Manuel de Falla, arranged and fingered by Miguel Llobet (Ex. #31):

Those are the notational schemes you will encounter for artificial harmonics in the classical guitar repertoire. Keep in mind these schemes will be altered by the numerous notational variations already mentioned such as diamond noteheads, standard noteheads, circles to designate harmonics, as well as the many descriptive terms added above or at the beginning of the passage.

I know. It’s complicated enough as it is. But now, add in publisher/printer/composer/arranger errors such as:

No wonder we’re all confused!

I’ve spent twenty hours of a beautiful weekend preparing this technique tip to help guide you through the murky underworld of harmonic notation. But, you may still encounter an indecipherable passage of harmonics. But don’t be discouraged. When confronted with a passage of harmonics that you just can’t figure out, even with all the information I’ve given you here, do what I do. Listen to how John Williams plays it! Haha. Or, just make your best wild guess.