Everything you want to know about the classical guitar technique of string crossings.

Note: This tech tip applies to the RIGHT HAND.

You can detect the same feeling of right and wrong with "m" and "a":

To feel the difference more dramatically, try playing on the first and third strings: 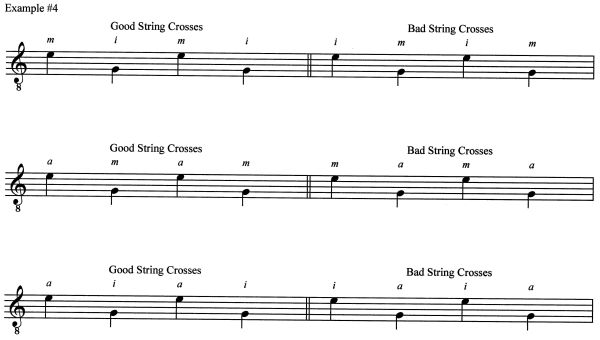 There are three ways to "set up" good string crosses:


The first method is to simply decide which finger to use first to produce the desired good string cross. In the following example, playing the very first open E on the first string with "i" produces two bad string crosses in the next measure:

But making the choice to play the very first open E with m instead of "i" produces good string crosses in the second measure: 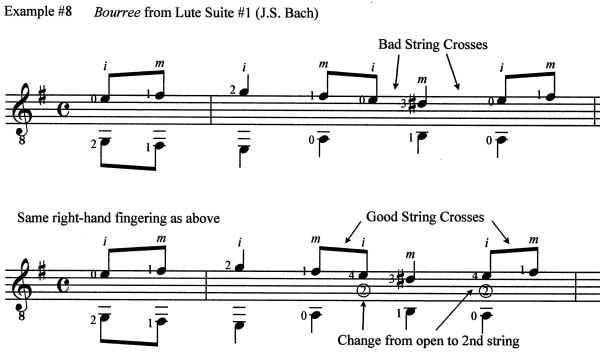 The third method to fix bad string crosses is to insert slurs at strategic points:

One must be careful adding slurs—although they can fix a bad string cross, they may introduce unintended consequences such as unevenness, accents on the wrong beats, difficulties for the left hand, or other inappropriate musical effects.

To some guitarists, repeating a finger is preferable to strictly alternating the fingers if the alternation produces a bad string cross:

However, one must be careful where the finger repetition is placed. If the notes being played are fast, repeating a finger might be a bad idea. It would be like running at a fast even pace and then deciding to repeat a foot:

When a bad string cross cannot be eliminated, just knowing where it is in the passage will usually enable you to anticipate and play it with no problem. Others will require specific attention in your practice sessions. Practicing the right hand alone is very helpful:

Finally, I must point out that although we can eliminate a lot of bad string crosses with all these techniques, we must face the fact that in real life we cannot get rid of all of them. It is kind of like trying to rid your yard of weeds or crabgrass. You will just have to deal with them!